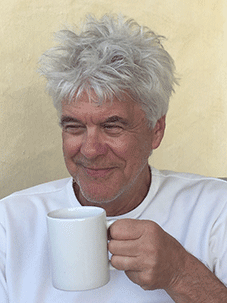 Buzz played 45s on KNEW and KJRB in the 60’s and now is playing the same songs again on KOOL. We sat down for an interview with the Captain…

KOOL: What was the best prize you ever gave away on the radio?
BL: A picture of a cow.

KOOL: You were renowned as Captain Buzzard. Were you actually a captain?
BL: You sure you’re not thinking of Captain Crunch?

KOOL: You flew with the Blue Angels…
BL: And did not hurl!

KOOL: We understand you impersonated a narcotics agent in Manito Park.
BL: You mean you didn’t?!

KOOL: Has Sam Kinison ever offered you cocaine?
BL: Yes.

KOOL: You claim one’s eyes will glaze over reading disc jockey bios. Do you still believe that?
BL: Uh-huh.